20 Nov Tired of orthotics – a strong motivator for change

Posted at 02:42h in Case Studies by adminva 0 Comments
0 Likes

Tired of orthotics – a strong motivator for change

In the second of our series of podiatry case studies highlighting patient successes, we examine the success Nick has achieved with foot mobilisation podiatry. While we focus a lot on women’s foot pain and health, men of all ages achieve great success with our podiatry programs too.

Nick attended our clinic with one motive—to not be dependent on his orthotics anymore. He made it quite clear in his initial assessment that the orthotics kept him pain free while he was wearing them; however when he didn’t wear them for any length of time he experienced the same pain in his back, knees and big toes again. Nick also made it clear he wanted to correct the underlying issues, and to free himself once-and-for-all from devices to minimise his pain. Nick’s case is not an uncommon one, and at Alternative Foot Solutions podiatry our main aim is to help patients with issues such as these, without orthotics.

Upon assessing Nick we found most of his issues were being caused by significant misalignment through his lower limbs. Our $35 assessment, which included X-rays (we use bulk-billing radiologists), quickly established this was affecting his knees, and was causing further pain up Nick’s back. Poor leg and pelvis alignment is a leading cause of lower back pain in Australian’s—and lower back pain will affect 4 out of 5 Australians in their lifetime. Adding to Nick’s issues was significant deviation through the big toe bilaterally (sideways), which was concerning.

Following up with Nick after his initial assessment, we jointly decided that a course of foot mobilisation therapy, combined with strengthening the intrinsic foot muscles, would be beneficial and could alleviate his problems.

To Nick’s credit he was very compliant with the sessions and exercises that were given. While the podiatry exercises we prescribe are not excessive, it is important that they are followed consistently and properly. Achieving a pain free life is a great motivator, and Nick was certainly enthusiastic about overcoming his symptoms naturally.

As we worked with Nick through his podiatry program, he began to wear less of his orthotics allowing the structures of his lower limb to adapt to the changes being created. When it came time for the final review of the corrective phase of treatment, Nick was at the point where he could remove the orthotics completely and not experience pain.

A big thanks to Nick 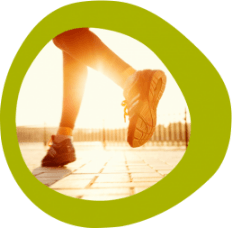 *Claimable on your private health insurance

Sorry, the comment form is closed at this time.